The Plesa Lab focuses on accelerating the pace at which we understand and engineer biological systems, particularly proteins. Towards this end, we develop new technologies for gene synthesis, multiplex functional assays, in-vivo mutagenesis, genotype-phenotype linkages, and computational approaches to explore high-dimensional datasets of sequence-function relationships. These allow us to both access the huge sequence diversity present in natural systems as well as carry out testing of rationally designed hypotheses encoded onto DNA at much larger scales than previously possible. Using these approaches, we can quickly characterize and engineer entire protein families, rather than focusing on individual proteins. Our work is highly-interdisciplinary and touches on aspects from many fields including biochemistry, synthetic biology, molecular biology, microbiology, structural biology, genetics, bioinformatics, and quantitative biology. 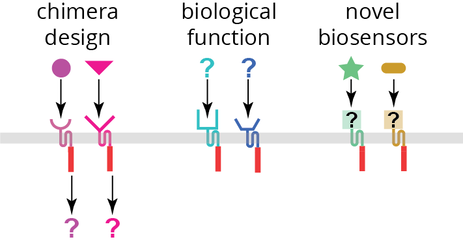 ​Chimeric Histidine Kinases for Biosensing
We are harnessing the immense natural diversity of receptor histidine kinases to build new biosensors. Bacteria have evolved a multitude of receptor histidine kinases to sense their outside world. These sensors, part of two-component systems, can detect many different small-molecule ligands and stimuli including nutrients, pH changes, quorum signaling molecules, metal ions, antibiotics, and other toxic compounds. Although hundreds of thousands of histidine kinases have been identified, with more being found regularly, very few of these have been characterized. Deciphering the function of members in this large protein family on a reasonable timescale will require the ability to experimentally characterize these systems at large scales. Our lab is building a platform to allow histidine kinase sensory domains to be characterized and engineered en masse by coupling them to a standardized output. This will allow us to both characterize their biological function and engineer novel receptors for ligands of interest against which natural sensors do not exist. 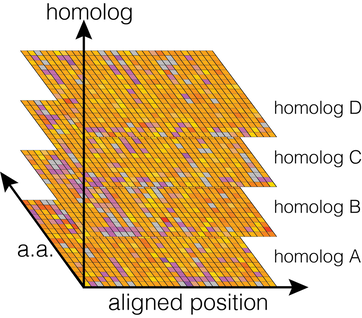 ​Broad Mutational Scanning
We are broadly interested in questions around the exploration of sequence space. Functional sequence space can be highly degenerate, containing many homologs with near identical functions despite having highly-divergent sequences as a result of evolutionary processes. Broad Mutational Scanning is a method to probe sequence-function relationships throughout an entire, functionally-related, protein family by assessing the impact of mutations around many different evolutionarily-related homologs simultaneously. We’re interested in addressing a number of open questions in this area:
Machine Learning Approaches for Exploring Sequence Space and Protein Engineering
Recently machine learning (ML) methods have made great progress in finding underlying patterns in sequence data to help guide limited experimental resources to the most promising sequences and even generate completely novel sequences distant from any input and potentially inaccessible by evolutionary processes. We are combining our unique gene synthesis capabilities and multiplexed functional assays to guide machine learning approaches and evaluate the key parameters affecting their performance.
Large-Scale Antibody Generation
We are developing methods to generate antibodies and antibody mimetics against thousands of antigens at once and carry out tests of cross-reactivity. 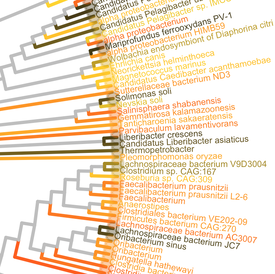 ​Synthetic Metagenomics
The advent of next-generation sequencing has lead to an exponential increase in the amount of digital sequence information available in metagenomic databases. Synthetic metagenomics involves identifying sequences of interest from these databases, using gene synthesis to build the corresponding DNA molecules, and characterizing these en masse using functional assays. This approach leverages natural diversity to identify the optimal sequences for some desired functionality.
​Antibiotic Resistance
The emergence of antibiotic resistance has typically been studied in the context of genes from individual pathogenic organisms as opposed to a more community-wide approach, which would better reflect natural diversity of targets affected by broad-spectrum antibiotics. Understanding how resistance emerges given different evolutionary starting points will give us fundamental insights into its spread. We develop methods to tackle such fundamental questions at large scales by synthesizing large libraries of genes encoding antibiotic targets, introducing them into a model organism, and screening them (and their mutants) for resistance. Our current work focuses on dihydrofolate reductase (DHFR), a major antibiotic target in the folate acid biosynthesis pathway which is required for nucleic acid synthesis. 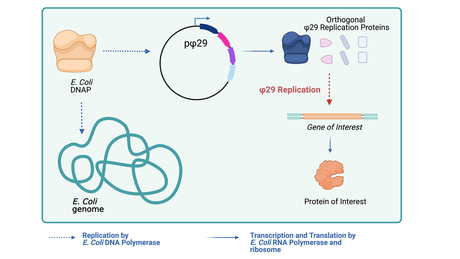 Orthogonal Replication
We are investigating methods for orthogonal replication of DNA in bacterial hosts for eventual use in directed evolution appraoches.